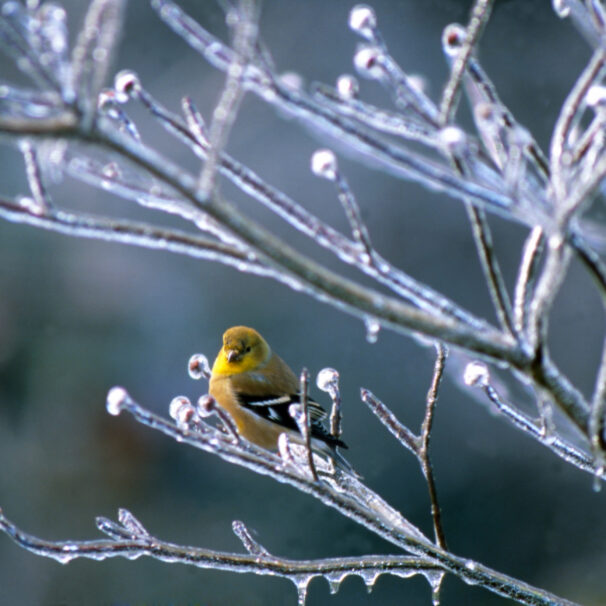 I was in Austin for a conference during the ice storm that impacted a large part of the country. The storm put resilience in perspective.

When we departed the conference on Friday, the airport had been closed for two and a half days and had just reopened at noon. There were thousands of people seeking a way out of Austin that afternoon.

I had a traveling companion for this trip, so we arrived early, checked bags and prepared for a wait. It was a great opportunity for people watching. To breakup the boredom, my flight had four gate changes. We watched many flight delays and cancellations.

The plane for my flight had arrived in Houston so I wasn’t worried. At the conference we had discussed flights cancelling and having to drive, but so far, things were stacked in my favor. As we approached boarding time, I saw our pilot and co-pilot arrive, followed shortly there after by the air crew. Great! We had a plane, pilots and an air crew. I was going to see Tampa in a few hours.

The boarding time came and went. The door was open, the pilots and crew were on board. I watched the fuel tanker and crew fuel the plane. But the luggage cart hadn’t moved, and no one had called us to start the boarding process.

Departure time came and passed, with no notice from the gate employees or updates online. By now my hunch was that there was a mechanical problem with the plane. This hunch was eventually confirmed when they informed us that one of the toilets in the back of the plane was out of order and a mechanic had been called. We waited and eventually our wait was rewarded by the news that not one but both rear toilets were not operational, and they were cancelling our flight.

When I reached the front of the line, the gate agent was tired, that was clear. I smiled and decided to be the nicest person he would help that day. Afterall, my fate was in his hands. I asked him if he had been rebooking flights all day. In fact, he had been rebooking flights for the past 9 hours. He looked up my reservations, told me that we might be able to get out tomorrow night.

At that point, I had lost confidence that the airline could get me home in time for guests arriving in two days. So I smiled, said we would be driving instead, asked to just have the tickets refunded. He directed me to call the airlines for the refund and told me that I would need to pick up my checked bags at luggage kiosk number 3.

That was when the fun started.

We booked a rental car, got a milkshake for dinner (now that was the good part of the night!) and went off to wait for my bag. And wait we did. For hours. The nice man in charge of unclaimed bags let us know that the gate agents lie about how long it will take to receive luggage for cancelled flights. They lie all the time. It could take up to four hours to see our bags, not 15 minutes.

After four hours of waiting with no luggage to I journeyed to the priority check in lane where I had been directed to go find out if they would ship my bag. I settled into the new line. My traveling companion sent me luggage updates from kiosk 3.

There were two ticket agents and two agents at the self-check in. There was no one checking in, but those two check-in agents maintained their positions at the ready while the lines of customers waiting for ticket agents grew. They did share that the agent working our line was the shift supervisor.

Eventually the check-in agents left. Then the ticket agent working with the non-priority customers disappeared into the back and never reappeared. And then our line’s ticket agent, the shift supervisor, threw her hands in the air, declared that she couldn’t take any more, and walked out.

Two long lines of customers and no one to serve them.

The women on either side of me burst into tears. I did my best to utter encouragement, but they weren’t hearing me, and they weren’t having it.

After another 20 minutes, a new agent came out, yelled to everyone to check their emails and if they had any further questions to call the airline. For customers who asked questions of her, she repeated to check email or call the airline. Then she disappeared to wherever the gate agents go.

We had been abandoned. The airline phone number recording indicated it would be at least 4 hours before a call back.

I’m a million-mile flier on this airline. In the decades I’ve been flying I have had many cancelled flights, and I have learned it just doesn’t do any good to get upset about it. The airline certainly didn’t want to delay my flight. But, as far as how their customers had been handled, I have never seen it this bad. I have never seen supervisors quit in front of me. I have never seen a ticket agent scream at lines of people waiting patiently for help. I’ve never been given a solution that was hopeless as the last agent gave to everyone in the line. And I hope I never see it again.

There was no resilience shown by the airline staff. They didn’t offer solutions, hope or encouragement. They turned their backs.

Contrast that experience to what we saw at the conference. On the first day, word arrived that a number of speakers and planned attendees had their flights cancelled due to the storm and would not be joining us.

These cancelations meant that one plenary speaker and one keynote speaker would not be at the conference. The association’s Board of Directors took action, drew from the attendees and vendors present to create a fantastic panel discussion the second day and a compelling presentation on the final morning of the conference.

They could have canceled the plenary and keynote events. But they pivoted, inventoried their human capital at the event, and gave us a great experience.

That was an opportunity to see agility and resilience in action.

On the way home, we had a lovely drive, saw interesting things, tried some new food and generally turned a bad situation into something wonderful. It did my soul well to not stand in another line.

In Mississippi, my phone rang. It was the airline returning my call twenty-two hours later. The agent canceled the return tickets and promised us a refund. The missing bag, which we had given up on would be sent to Tampa. The sun was setting, and the sky was beautiful. The road was clear, and we were making good time. It was a good day.